Skip to content
Sisters  Laura and Helena McDonald-Stallo were born into a lot that was going right when their Scotch-born grandfather, Alexander McDonald became a real live oil tycoon and millionaire in the late 19th century, as President of Standard Oil of Kentucky working with partner John D. Rockfeller.  Their mother Laura Palmer McDonald died in 1895 at age 25 when Laura and Helena were tragically young.
There was soon to be double those dollars and pleasure, in spite of the mournful loss of their mother for the two granddaughters; being toted around the world (Egypt, France, Italy, England) as young debutante socialites by their insanely wealthy and loving grandparents. The McDonalds had a son that died in infancy.  Their only daughter, the mother of their two granddaughters, had died when they were young girls, so it wasn’t long before their son-in-law, Edmund, Cincinnati lawyer and son of the US Ambassador of Rome, was gate-keeping the family fortune. When googling Edmund, we find legal requests for revoking letters of administration of Alexander McDonald’s estate holding Edmund Stallo as the administrator. It’s complicated, and apparently connected people were full of questions and not too happy with the arrangements. When a lot of money is at stake, some people will do anything and everything to get a cut of the deal; apparently Edmund fell into this pit.
In 1881, when life was still oil-rich bliss, McDonald hired Samuel Hannaford to build his Gothic estate named after his Scotch childhood home, Dalvay, in the heart of Clifton, Cincinnati, Ohio; surrounded by other baronial estates. It sat on 6 acres on the best corner in the village back then. Today the site is home to a Cincinnati Public School, the house was demolished in the 1960’s. Surrounded by exquisite wrought iron fencing, the front gates are the only vestiges of the past when driving by on Clifton Avenue; the surviving carriage house in back of the school and the rear stone-gate entry of the former estate is the size of a Midwestern modestly-priced family home. Children, (including my young granddaughter), run circles around the large stone and timber carriage house; parents gather at the back gates to wait for their children to rush out the school doors at the end of the day. 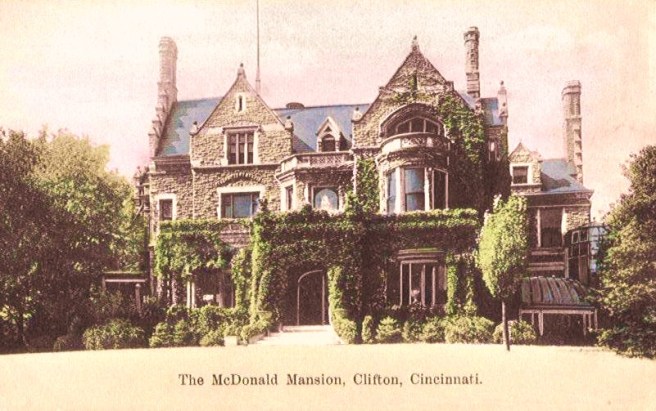 Alexander McDonald had bought land in Prince Edward Island Canada to spend summers away from broiling Cincinnati; where he named another estate ‘Dalvay-by-the-sea’. A manor of even more grandiose architecture than his home in Cincinnati; it would be frequented by the McDonald’s until the end of Alexander’s life in 1910. It replicated a miniature Vanderbilt’s Biltmore.
Fast forward to Laura and Helena’s teen years…Grandfather millionaire McDonald dies in 1910. The two girls inherit $15 million, ages 16 and 17. At first, things still ran rich and smooth, like the finest Creme Brulee…the girls’ father, Edmund Kirkbride Stallo managing the bank accounts and estate for his darling daughters, until they reached inheritance age. McDonald family members decided European husbands would do for Laura and Helena; they skipped right over the Blue Book list of eligible Cincinnati’s elite young men…and  the young heiresses married a French Prince (a nephew of Napoleon’s nephew no less) and an Italian Prince.
Both men apparently had princely dollar signs in their eyes. Helena’s favorite
diversion, in her San Francisco Call engagement announcement, was tennis. She’d called off her previous engagement to Nils Forman, as the article said, she had changed her mind.  She wed in Paris at St. Honore. Laura and her prince had children, Francesca and Camilla, living in Italy and other cities. Aristocratic names were handed down with elegant foreign sounds in the first degree. The blood lines, the duchess connects, the hierarchy created through these though brief marriages with children, is mind-bending even at a glance.
What could go wrong with a $15 million dollar estate? Well, bad investing at its worst, can be bad..really bad. Alexander McDonald spent $10,000. a year on his already paid-for estate, the stables of horses added up, the lavish parties for entire villages of people also added up…the tennis courts, the solid cherry flooring, the carriage collection, the indoor bowling alleys, simply exhausting. Son-in-law Edmund apparently wasn’t as savvy as his father-in-law; or maybe he took things for granted…an endless pool of money won’t run out until just about when it’s over when you’re not looking. His investment in a Gulf States Railway System is said to have failed (though this railway is famous and up and running).
The whittling down of funds soon led both baronial princes from France and Italy to throw in their wedding towels for divorce papers by 1930, and both marriages of the McDonald heiresses were over.  So was most of the money, gone by 1932, the stock market undoubtedly taking its own particular toll on the estate wealth. The sisters lives would never be as it had been before their funds were depleted. Though educated, they may not have had a great amount of personal resourcefulness  (chutzpah) to establish themselves or succeed in business on their own. Laura remarried another Frenchman and had three more children, living until 1972. Helena died of cancer early in her life near age 45, having one daughter. Helena lived not in poverty, but barely made ends meet. Helena’s grandson is New York born actor Rene Murat Auberjonois noted for his role as Father Mulcahy in the 1970 film version of MASH.
The Prince Edward Island estate Dalvay-By-The-Sea was sold for back taxes from Princess Laura in New York to caretaker Hughes for $486.00 who in turn sold it to a rum-runner who goes bankrupt who sells it to one of his creditors, who happens to be the Lt. Governor of the island, where it becomes a part of the federal government for inclusion into the National Park system. In 1994 Dalvay became a National Historic Site of Canada.  The nearest touch with the legacy of Helena and Laura if you visit…a grand hotel of a place.
In the states, you can visit the carriage house Laura and Helena once scrambled out to for a seat in the best carriages in town…the carriage house stands in Cincinnati, at the end of Wood Avenue, a short street of 12 houses. The stone pillars are visible at the end of the street, holding the hinges of the massive wrought iron gate you can saunter on in through history itself. Laura and Helena would love to know the gate is still there, the Old English letter “M” for McDonald crafted in wrought-iron, letting everyone know who once lived there. 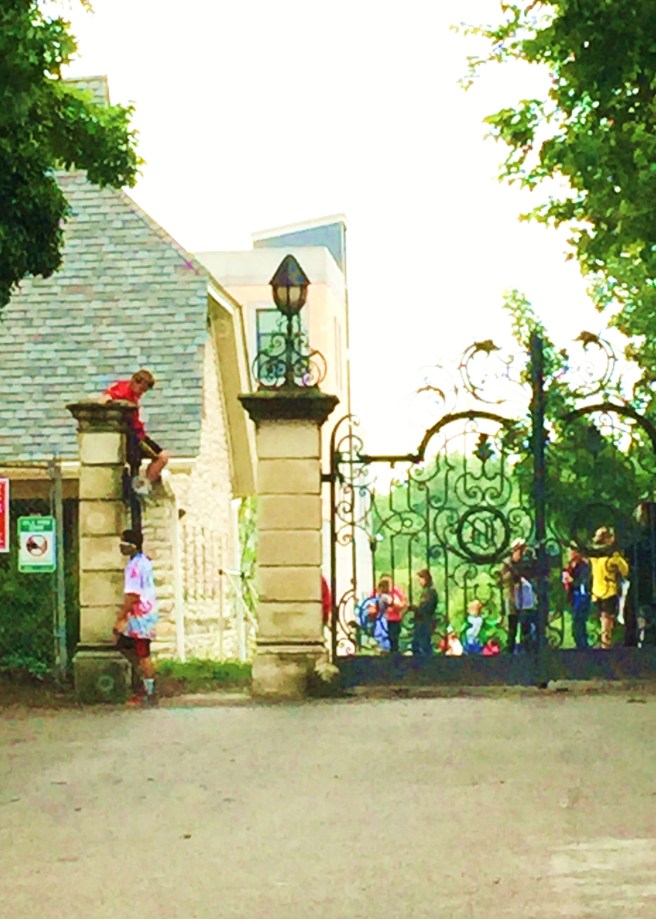