Skip to content
May 2, 2017 ~ bonniejeannewilliams ~ Leave a comment
Even 170 years ago, Cincinnati buzzed in the spring….a veritable garden from the Ohio River up to Dr. Allison’s Peach Grove and beyond…..that continued to grow fine peaches long after the site of Ft. Washington had been transformed into the epicenter of our city. Mary Jane Irwin, born in 1829 in Cincinnati, took it upon herself to document one particular year , 1843, before she died of tuberculosis in 1847, at 18 years old.
Irwin’s pages are windows into a world and place…losing all sense of time and dimensions, if we pause to think when we read her words in indelible ink tucked away and preserved in her journal.

That former Fort became the literal front door of Mary Jane Irwin…her father’s house was where the Ft. Washington public memorial stands today. One of Dr. Allison’s peach trees apparently doesn’t know how old it is and currently presents peaches. 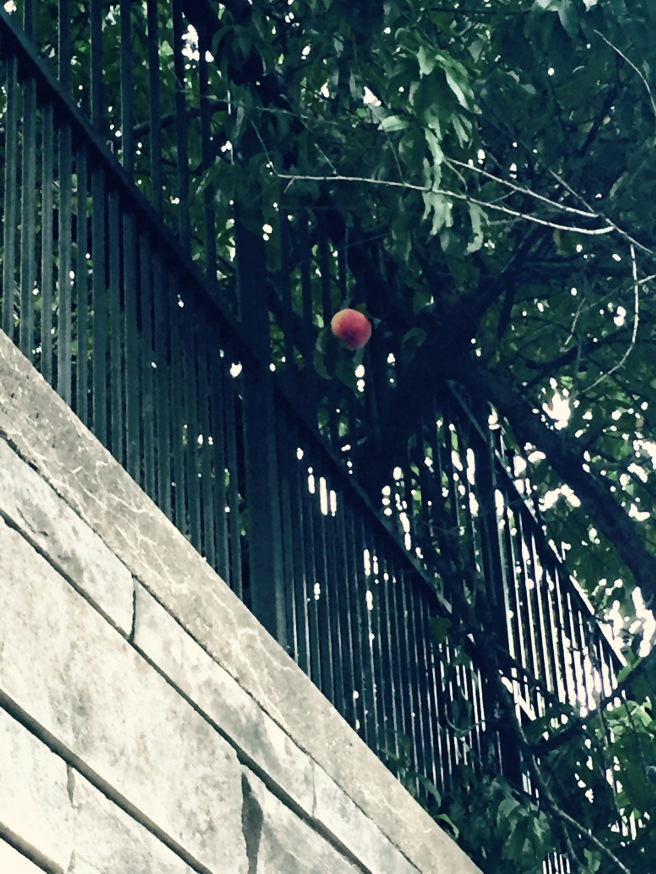 Irwin’s next door neighbor was Robert Buchanan….a popular and busy man about Cincinnati; a philanthropist in the greatest sense of the word. Mr. Buchanan, in 1843, had a garden behind his home on McAllister Street (now the site of Western Southern on 4th St.) He and his nice cronies (including Nick Longworth and Probasco) created the Cincinnati Horticulture Society that continues to this day. Their meetings were in Buchanan’s home, just across the unpaved, frequently muddy Fourth St., across from the Irwin’s where Mary Jane wrote her journal, day in and day out. A teenager, she undoubtedly thought this group to be just one more of her father’s so many associates crowding up the porch rails. (R. Buchanan also founded Spring Grove Cemetery).

Mary Jane Irwin (her family pew was filled every Sunday at Christ Episcopalian Church, just steps from her home) wrote in her journal about not attending a ‘heathen goddess celebration’, which apparently wasn’t okay to do, according to her instructor Mr. Van Doren and the rest of society, on Monday, May 1, 1843:
“Monday,
As there was no celebration, ANY WHERE, I attended school and received 25 good marks ‘for not being so foolish as to attend a party in honor of a then goddess’. Josey Lytle sent over for me…I spent the evening there, “non est” was quite amusing.”
By Friday the outlook was 100% better for Mary Jane and her socializing for spring.
Here she tells us what developed later that week; when she skipped school!
“Friday,
I did not go to school, as I wished to attend Miss Comstock’s “May Party”. Anna Hewson was Queen…and in the afternoon I went to Schnetz’s Garden. We bought cakes.”
https://books.google.com/books?id=FjOcGuCex38C&pg=PA266&lpg=PA266&dq=children%27s+may+day+parties+1840s&source=bl&ots=eGMOaHRLue&sig=r1FRZ8531
Of a well-to-do family, Mary Jane was incensed by no parties anywhere on Monday, but by Friday, all was well and good regarding May, Queens’, Parties and the rest.
By that Sunday Mary Jane was back in church; as to be expected.
And it’s a safe bet she told no one but her journal she skipped school that day.
So, let’s keep it to ourselves here on FB, shall we?